Around the corner from the mission is the office of Cie’na Schlaefli, who monitors water levels and erosion in the San Xavier district. It also helps to plan floods.

I met her at her favorite lunch spot – a balcony adjoining her office building.

From this perch, we could see quite far across the neighborhood. We had maps in front of us, but we hardly needed them. She explained to me what we were all watching.

“It’s the O’odham peas that they grow every winter. They are yellow now because they are drying out. They will harvest them soon,” she said.

She said part of Father Kino’s legacy is introducing Tucson to other Spanish settlers. He thought there was enough water here that it could potentially become a metropolis, like Mexico City.

She said that while this area looked lush to other desert dwellers, it really wasn’t.

“God, I would compare this to Cities of Gold,” Schlaefli said. “And then it encourages a lot more people to end up moving here.”

The promise of water brought more settlers and with more settlers came more government. In the late 1800s, the US government enacted the Dawes Act to dismantle tribal lands and give portions of them to farmers.

It was also designed to force Native Americans to assimilate, offering them plots of land to farm if they agreed to the arrangement. The government eventually gave the Tohono O’odham smaller sections of the land they already lived on.

And land allocations went to families, not communities.

On a map, Schlaefli marked the housing estates, which were all along the river.

“That’s where the water is, where the resources are, where the mining is to the south,” she said. “So there was a strategy to try to take this land from this particular location because that’s where geologically there are volcanic rocks underground, and water is being held.”

Again, the Tohono O’odham knew how to deal with water in the desert. The settlers used the water as they had in the greener places they came from, not recognizing it as limited.

“People started putting reservoirs on the river downstream and digging deeper ditches,” Schlaefli said. “People created these ditches, and then when big monsoons came, it just reduced that spill.”

She explained what happened in a photo of a 30ft topsoil drop that was lost in the river. It’s a dusty wall that almost looks like the side of a canyon, with brittle rocks of all sizes lining it, as if they’ve just fallen.

“When that happens, the water table goes down, just because now water can’t be held in that soil,” she said.

Settlers continued to dig wells and introduced water-intensive crops, such as pecans.

“There wasn’t enough groundwater to come to the surface at San Xavier,” Schlaefli said.

The flow of water has stopped.

“Farming has basically ceased,” she said.

Jacelle Ramon-Sauberan drove me to a quiet spot near the Santa Cruz River. There were tall trees, forming arches and providing shade from the strong sun.

“Where we are is actually our riparian zone. This is our Hikdan,” she said.

It is a restaurant area in the neighborhood of San Xavier.

“I actually got lucky because I actually wanted it to be open for us and like magic it is.”

SEE BIGGER The Wa:k Hikdan on the San Xavier Indian Reservation, where a restoration project to bring back running water is underway.

Some community elders, like Ramon-Sauberan’s grandmother, remember coming to play in the water here as children, until it dried up in the 1940s.

“I can’t even imagine how she’s like, ‘Yeah, we used to play in it. And there were all these lush trees,'” she said.

As dry as it is here now, it’s not as bad as it was in the mid-20th century. This is because the tribesmen pushed back.

The Tohono O’odhams sued for water rights in the 1970s, and former Congressman Morris Udall came back with a bill that would guarantee them those rights.

“This is the most important thing for the whole future of business people, working families, everyone in southern Arizona,” Udall said.

This bill – the Southern Arizona Water Rights Settlement Act – was passed in 1982. And you can see the result right at Hikdan.

“It’s kind of funny because that’s what I’m writing about right now, for my thesis, and I was working on it last night,” Ramon-Sauberan said.

She said the lawsuit and the bill were crucial to bringing back some water.

The new law gave San Xavier a water cut from the Colorado River through the Central Arizona Project.

Then, in the 1990s, when Ramon-Sauberan was a child, the Tohono O’odham Nation planted trees and dug a trench to move water around the Wa:k Hikdan.

As water was extracted from other sources, she said people started seeing groundwater return and aquifers started flowing again around 2018.

“I never thought I would see this in my lifetime,” she said. “But then when we come down here, they turn the water on, and it flows here, and we have the pond running. Once I grew up, I was able to make those connections. And in a way, I put myself in these stories that my grandmother used to tell.

Back on the porch, Schlaefli showed me a map of the river flowing along the highway.

“I learned some things the other day that I called an elder about to ask because I was looking at these older images,” she said. “That’s when a huge chunk of the Santa Cruz River collapsed. It’s right here. 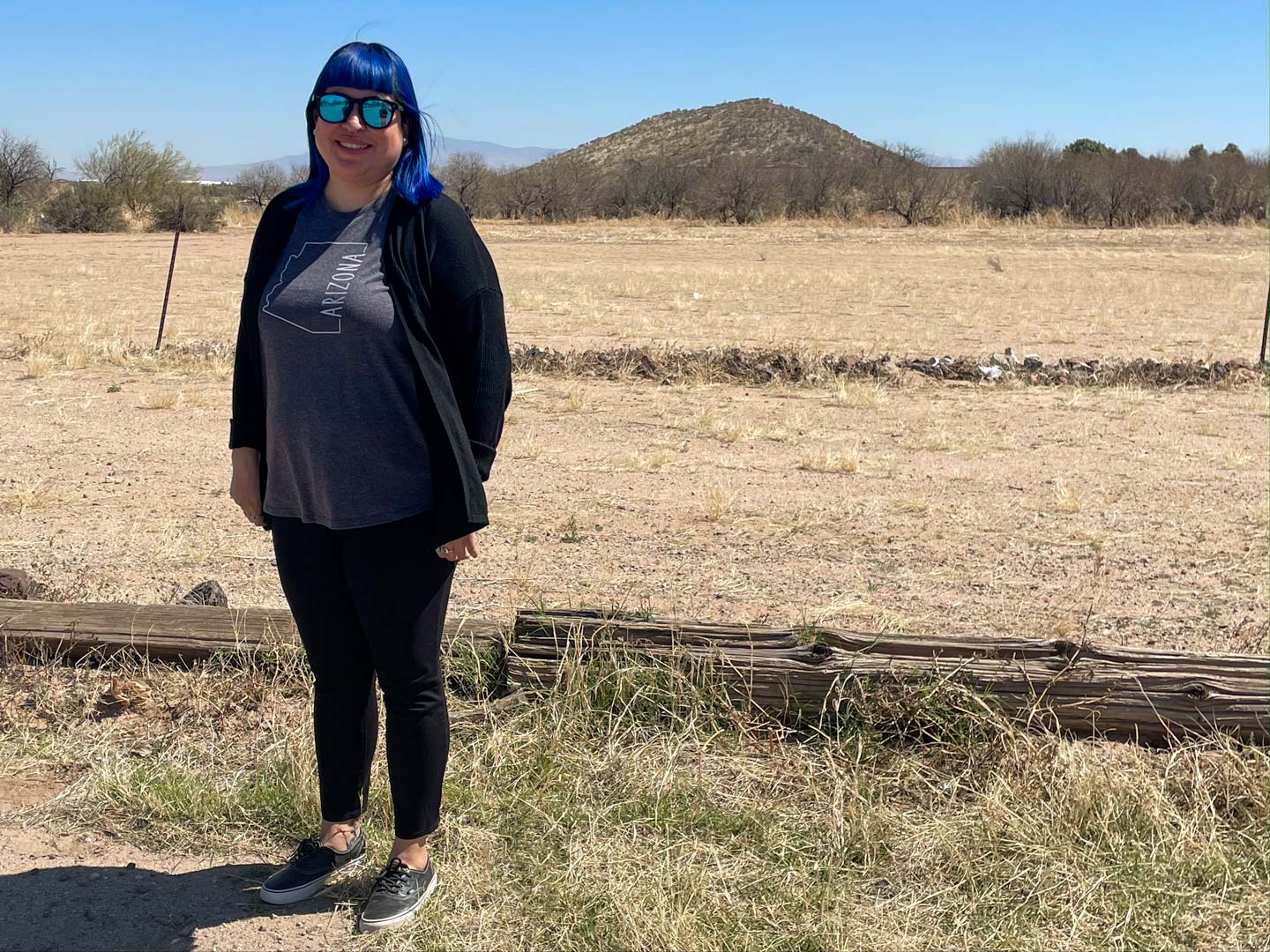 She said the farm lost about 80 acres in 10 years to floodwaters.

“It’s I-19. It’s going north. It’s the farm fields right there. So this huge piece of land fell down,” she said.

After SWARZA, the farmers were able to work on stabilizing the bank – they put in a formation dyke and stormwater channels. Schlaefli said this use of traditional farming techniques was the work of the original farm manager who installed them and seeded them with mesquite.

They also put in floodwater channels designed to deposit sediment here – essentially replacing the soil that was lost in these 80 acres.

“It’s about thinking about how to not only drain the storm water out of the system, but also how to repair the land. It will take 100 years to make a significant breach in the increase in these sediments,” she said. “People are going to be here for the next 1,000 years, so that’s the intention – to care for the earth, fix it and heal it.”

And she said if you know where to look, you can see remnants of ancient water management techniques around Tucson and southern Arizona.

“These were terraces designed to slow water down and seep in, and sometimes you’ll see rock mounds, and that’s where agaves would be planted for dryland agriculture or other crops that just use natural precipitation.

Schlaefli compared images of the modern farmhouse and historical relics side by side. “It’s just a big version of that right using modern tools with heavy equipment. it was done by hand and probably with sticks and lots of hands,” she laughed.

The rocks formed lines that zigzagged down a hill.

“There are lessons in the rocks, aren’t there? And now I look for them everywhere,” she said. “If something seems intentional, it probably is.”

Schlaefli said they’re getting federal money to continue building this stuff, including through the Biden Infrastructure Act and COVID relief funds.

“What’s really great and encouraging is that the federal government is looking at a more holistic approach to watershed management versus what they call gray infrastructure where they just channel it, but looking at the whole watershed,” she said.

In the car, Jacelle Ramon-Sauberan and I discussed her thesis further. Everything we had touched, she will cover there too.

And his research began in his own family.

“If you want to know anything about land and water,” she said, “Everybody says, ‘Go talk to your Aunt Julie. And she said, ‘I won’t be here forever, so I want to have this opportunity to be able to share all these materials, all these different things with you, and in a way pass on the knowledge to you.’”

Ramon-Sauberan is a future grantee, which means she will inherit a piece of land in the San Xavier district. She composed the story of land and water for her own use, but also for her daughter, her nieces and other recipients who needed it.

So she put probes into the community about what kind of information people would need.

“I just didn’t want to do something for my sole benefit,” she said. “I don’t think like that, you know?

Ramon-Sauberan said there were cultural traditions that she felt shouldn’t be written down, but after speaking with her family she decided it should be because otherwise it could be lost with the time.

“What’s really great, and what makes me proud to be from San Xavier, is watching all the historic events that have happened, and having these elders, everything they’ve done over the time to get to where we are, and really stand up for what they believed in,” she said.

And she says knowing the story is key to her future and other future beneficiaries as they continue to try to make it work in the wilderness.