Our dear friend, Lois Red Elk, mountain diary‘s poet in residence, is recovering. She sent a note to say that she misses having contact with all of you, the thousands who have become readers of both her poetry and her reflections on the sentient natural world. Let’s all wish him good luck.

As she gathers at Wolf Point, on the prairie, and by the big river, Lois also sends greetings and a brand new poem. Titled “Not Eight Eyes,” it will appear in his forthcoming new volume, in a section of works relating to Lakota/Dakota cultural legends and life stories. This one builds on the Lakota legend of a trickster – not a coyote but an Iktomi who sometimes tries to feel better by knocking others down.

“Not Eight Eyes” is about a haunting visit, a dreamlike encounter. Sensibility is something that modern America has only recently begun to consider as an essential and indivisible part of being. For Red Elk, traveling the world without paying pay attention to the interrelations of everything on Earth is like do not grateful that we breathe the air. Sensitivity is omnipresent, it connect us, flows through us and fills the perceived spaces between.

In this poem, what does the poetess say – what does she hint to Inktomi tell us?

We are thinking of you, Lois Red Elk. We are grateful for all that you bring to MoJo.

You know you shouldn’t – but the glass jar

will work for now – you need to keep track of

being hit or bitten – you have to move your

body slowly – one shadow at a time – your eyes

look at cloud positions – directly overhead – not out

left or right of the target – but directly

thumbs above the circle – you imagined –

around what you want – but respectfully fear –

take control – of your heavy breathing – of the

unsteady beat – deep in your chest – so as not to

exhale too hard – so as not to begin revelation

shake – which will start the vibration – of the lure

all gullible in a frenzy – of doubt – or a clamor –

at a breakneck pace – you know this one has the old

connections – which will be used against you – to bring

doubt – to your hands – now is your chance – to slowly

lower the dazzling glass – on the one you secretly

it will be victory – over that cunning one – who deceived

first humans – with a curiosity – an unusual constant

prying – into a new life – above the darkness below – into

the terrestrial canvas – but just as you aim – to lower the

the head is spinning – it’s not what you might imagine –

not eight eyes – but a human face – just like yours –

gazing – pleading not to be captured – eyes

the fright – the display – it was the sudden realization

that your common culture – is a mirror – reflecting –

instantly spins – from the edge of the table – into this web

life – the life you longed for – leaving you defeated – 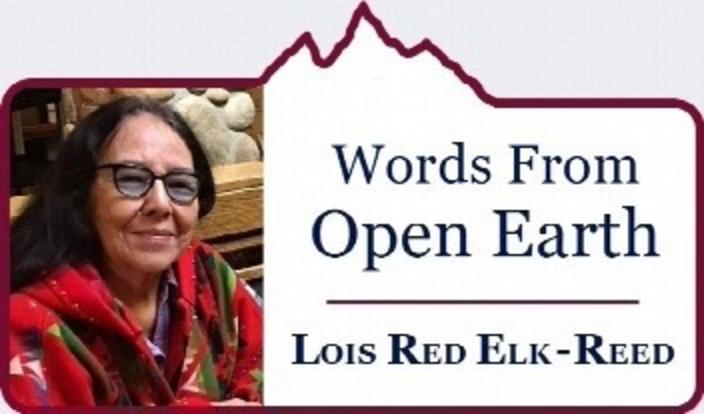 POST NOTE: We are happy that Lois is working on a new collection of poems and we will let you know when it is published. In the meantime, ask for his other volumes at your favorite bookseller: Our blood rememberswinner of the Woodcraft Circle of Native Writers and Storytellers Best Nonfiction Award; Weather Dragonfly; and Why am I going back to Makoce with a foreword by recent Montana State Poet Laureate Lowell Jaeger and nominated for a High Plains Book Award in Poetry. Given the headlines that continue to appear about discoveries of new atrocities committed in boarding schools for Indigenous children, we encourage you to read Lois’s contribution to MoJo published last June, The Unspeakable Past Of Indian Boarding Schools

Make sure you never miss a poem by Lois Red Elk by subscribing to mountain diaryit is free weekly newsletter. Click here: https://bit.ly/3cYVBtK